The Electrical Board of Missouri and Illinois members  continue their involvement in community activities each year.   We are proud to have assisted the following organizations….

**Due to covid, we are unable to support a few of these events. However, if you want more details for future events (hopefully next year), we can add your name to the list and contact you then.

Saturday in October – (cannot do it in 2020-2021 due to covid) – Barbecue at VA Medical Center – JB – 10 a.m. – 1:00 p.m. – EBMI members, their family members AND industry associates serve food/drinks to the veterans and assist them to the gym area. It’s a wonderful way to honor 80-100 wonderful veterans. We thank those volunteers below who helped at this event (and to those missing from the picture but were in attendance or donated items.) If you would like to join us each October, email annie@electricalboard.org. 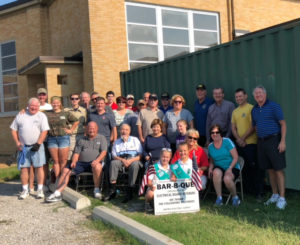 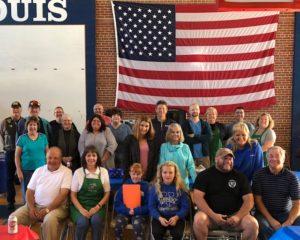 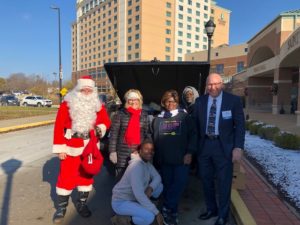 December 2, 2021 – Christmas Mixer – St. Charles Convention Center – “TWO HANDS, TWO CANS” Food drive to benefit Feed My Peeps. Over 1,600 canned goods were brought to the Christmas Mixer for this organization in 2019. We hope to exceed this amount.
While covid cancelled the 2020 Mixer, we did hold a raffle and raised over $5,000 which was distributed between Salvation Army and Feed My Peeps, which was so appreciated during this challenging year. We thank all members who contributed prizes and/or purchased raffle tickets.

Since 1975, EBMI members/guests have donated over $91,800 to the red kettles on their tables at our December Christmas Party.

Since 2004, the EBMIVets group of EBMI has coordinated barbecues for the Veterans, providing food/drinks for 80-100 veterans in the fall.   They also have hosted several movie nights at the VA Medical Center for the veterans.

At our Sportsman’s Holiday Golf Event (since 2004) EBMI members/guests have donated  over $9,800 to help EBMIVets provide their annual barbecue to veterans at VA Medical Center each year.

*EBMI participated with a float recognizing our veterans  in the Welcome Home Parade for Veterans in St. Louis in January, 2012.

Ronald McDonald House – since 1995 – providing brunch in October and barbecue in summer for families of children at the two area children’s hospitals.